by Yukti Sethi
in Buzz, News 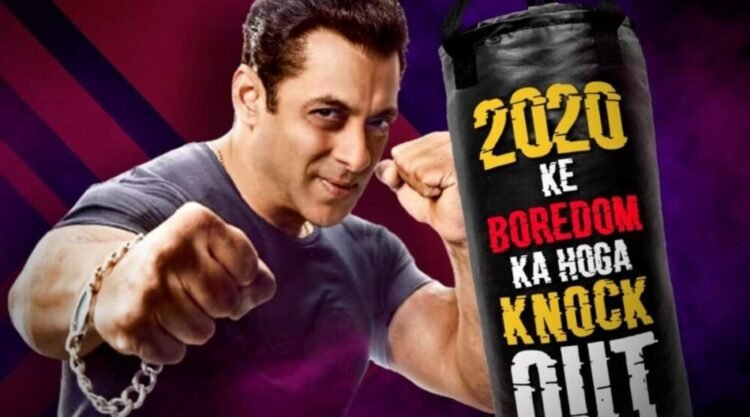 India’s biggest reality television show – Bigg Boss is back with Season 14 with full of excitement. The show is well known about the tasks given to the contestants in the show and for showcasing their real personalities and qualities, thus entertaining the audience throughout the fights and friendships in the house. Bigg Boss 14 hit the screen with an entertainment blast on Saturday night with Salman Khan as the host. Salman Khan – “the Swag se Swaagat” person made a grand entry vibing with the song.

The premier started with him, pulling humour about how the celebrities are stuck with the household chores during the coronavirus pandemic. He mentioned that proper measures were taken to ensure a corona – free environment and that, the contestants have finished their quarantine. Due to safety concern, there was no live audience in the show this time.

Bigg Boss Season 7 and Season 13 winners respectively – Sidharth Shukla and Gauahar Khan and Season 11 Runner Up – Hina Khan, performed on stage as well as in the house with a recap of their memories in it.

Salman Khan, sticking with the traditional practice of the show, brought the “katghara” of the show and asked various questions from the three of them and showed Gauahar Khan’s Tweets about Sidharth Shukla, thereby asking her to explain.

For the first time in history, they were assigned a very important role in deciding whether a contestant would be confirmed to live in the house or not. They were thus given a cool title as the “Toofani seniors”.

The first contestant – Eijas Khan gave an introduction video followed by a performance on “tera baap Aya” and he discussed his past experiences as an actor, working with Salman Khan in a film. He claimed that he has been practising social distancing long before the coronavirus pandemic and is thus immune to live alone.

The second contestant was a South actress Nikki Tamboli who was described as “beautiful and unfiltered” by Salman Khan. She talked her heart out about the concept of the women feeling jealous of her because of the guys liking her. Salman Khan entertained the audience by speaking of her totally opposite personality with regard to Eijas.

He introduced them with the concept of BBQ – Bigg Boss Quotient – which is the ability of the contestant to qualify to enter the house. Both of them were selected by the “toofani seniors” and were tested by them after they entered the house on some qualities.

Next was a beautiful couple – TV actress – Rubina Dilaik and her husband, actor Abhinav Shukla. They gave a fascinating dance performance and were teased by Salman Khan about the typical husband-wife married life and was happy that he is safe. A press conference was also held on a video call with four news associates and the couple was questioned by them. They answered them well. In order to split them, they selected Abhinav only and Rubina was asked to wait in the rejected section.

The next contestant was Jasmin Bhasin who was asked to make a menu under the budget of Rs.2020. How she answered the question cleverly and chose the items from the menu, led to her selection by the “special audience” – toofani seniors, leaving Salman Khan and the audience in fits of laughter.

TV Actor Nishant Singh Malkani was the next contestant who claimed to be a freak boy. He was a huge fan of Salman Khan and they had a good time reciting Salman’s dialogues in various movies. They were interrupted by the entry of the next contestant Shehzad Deol who is a model. Salman Khan asked BBQ questions from both of them and another contestant – singer Sara Gurpal was called who impressed the audience by singing her song “Tu Chahida” on the show. Only Shehzad Deol was selected from the three of them.

Son of renowned singer Kumar Sanu – Jaan Kumar Sanu also entered, who has been Salman’s voice in several of his movies. Pavitra Punia, an actress, made a grand entry on “tip tip barsa paani”. Only Pavitra was selected.

The last contestant to enter was singer Rahul Vaidya who overwhelmed the audience by singing Salman Khan’s movies’ famous songs including the song “ mere rang mei rangne vaali” from the movie “Maine pyaar kiya”. Salman Khan gave a tribute speech for late S P Balasubramanyam who sang for him in many movies. The special audience selected Rahul. In the meanwhile, Radhe Maa also entered the house to give blessings to the contestants.

Let’s see how their journey begins!!