Movie Review: You Can’t Blend In When You’re Born To Stand Out, “Wonder” is in and out Wonderful

by Ummarah Khan
in Buzz, News 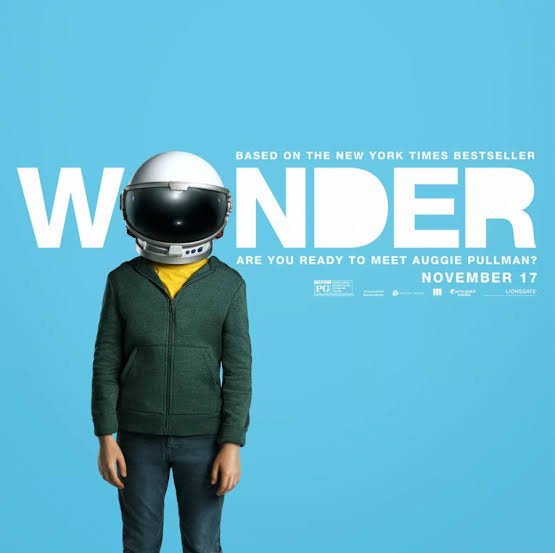 Wonder, the movie comes to us from the director of The Perks of Being a WallFlower, Stephen Chbosky. It is based on the award winning novel of the same name by Raquel Jaramillo, under the pen name of R. J. Palacio.

The movie follows a boy named August Pullman played by Jacob Tremblay, Auggie, for short, who was born with Treacher Collins syndrome, which causes disfigurement. Ten-year-old Auggie has had to undergo 27 surgeries since birth to make sure he could live and because of which his mother gave up working on her PhD to take care of him.

The movie begins with a new challenge in Auggie’s life: entering fifth grade in a mainstream school after being homeschooled for ten years of his life.

His parents decide to send him to school to become more comfortable in the outside world. The family seems apprehensive about this step for the possible chances of Auggie getting bullied and isolated. And, it can clearly be validated after witnessing people gawking at him on his first day of school. Following the innocent advice given by his mother, “If you don’t like where you are, picture where you wanna be,” and using his active imagination, he gets through these uncomfortable situations.

Just when it feels like the movie is being stuck in the daily school activities, it starts playing scenes from the first day but this time from the perspective of his parents, sister and close friends  And that’s one of the reasons which makes ‘Wonder‘ stands out amongst many movies with a similar plot.

Generally, with movies like this, the plot revolves around the character with the issue and doesn’t concern with other characters. But Wonder is a great exception, it showcases how not just Auggie is affected, but how people around him are affected. From his parents, sibling to friends, it features everyone.

Wonder has a beautiful message instilled, that not just Auggie or people like him deserves respect as humans but everyone in general deserve to be respected, no matter what the situation is. It also makes us think that for how long a small joke or comment can linger in the other person’s mind affecting it.

It talks about people living with these facial differences but at the same time it also talks about the people affected by its aftermath- family and friends of the individual.

It teaches so many different things and is amzing at portraying different emotions by different characters, justifying each of their actions and that is what makes it close to reality.

The movie rightly delivers how self-love and human connections give us hope and help us live.  These characteristics of the movie make it a wholesome family entertainer. It is a wonderful tribute to everyone who endures struggles that are both obvious and those that are unseen.

The role of August is perfectly played out by Jacob Tremblay, he has portrayed each of his action sewed in a burst of thoughtfulness and emotions. As for Julia Roberts and Owen Wilson, we dont think anyone else could have pulled off the roles better.

Wonder showcases acceptance, love, friendship, kindness sewed with lots of fun moments. The best part of it was the messages it provides; “When given a choice between being right and being kind… choose kind”, “Be kind… for everyone is fighting a hard battle” Watch this touching movie that resonates assurance of kindness.

Wonder is trending #8 on Netflix Movies. Watch it and leave your views in the comments section below. And for more movie reviews, keep checking our entertainment section.

Is Akshay Kumar The First Bollywood Actor To Play A Transgender?

Is Akshay Kumar The First Bollywood Actor To Play A Transgender?