Although Breaking Bad cannot be recreated, but if we imagine getting it made again, several current performers come to our mind who can play the roles with equal depth and intensity that the original cast showed. 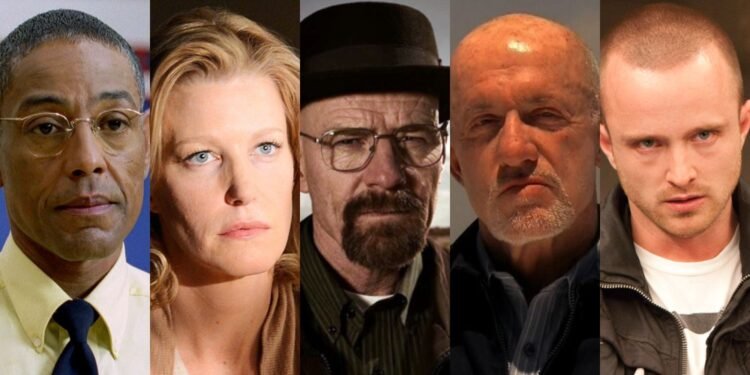 Breaking Bad’s gravity is in the network of relationships that connect its key characters, not in its stunning cinemascapes or how perfectly the story is molded to match its themes.

Whether it’s Jesse and Hank, Flynn and Skyler, or Walter and every drug king he defeats, the success of the show is dependent on the characters.

While some may argue that Breaking Bad cannot be reproduced, other performers could portray the same roles with just as much depth and relatability.

Gus Fring’s character is sharp, stubborn, and devoid of feeling (which flips in moments of intense emotion).

Giancarlo Esposito repeatedly affirms the complexity of his character, to the point where fans find it difficult to distinguish the actor from his role.

Donald Glover, also known as Childish Gambino, is most equipped to play a new version of Gus – perhaps not as uncompromising as the original.

Still, Glover can draw on his extensive acting experience to bring this character to life in his unique way.

Robert Pattinson rose to stardom thanks to the Harry Potter franchise (and later Twilight), yet he was first dismissed as nothing more than a young heartthrob, let alone a real actor.

With outstanding performances in films like The Lighthouse (2019) and High Life (2018), he has proven that he can handle the Western genre as well as the horror genre.

Any actor who wishes to play Jesse Pinkman, a brilliant young man with an immeasurable, and regrettably inaccessible reservoir of empathy, must-have range.

Given Dev Patel’s tremendous adaptability, it’s easy to imagine him as a shady lawyer with a questionable moral code. In Skins, Anwar Kharral embraces the wilder side of life, partaking in actions that are against his faith.

With his troubled past coming back to visit him at random intervals, Saul Goodman is a tricky character to interpret, but Patel isn’t likely to have any issue doing so.

It would be a change from his regular manner, but one that would be plausible.

Mike Ehrmantraut is a modest man who lavishes presents on his family and cherishes their time together. In contrast to his grandfatherly exterior, he is also one of the series’ most badass murderers.

Idris Elba is one of the rare actors who can pull off a part that appears to be simple on the surface. Elba’s multifaceted villains, from the unfriendly Commandant in Beasts of No Nation (2017) to the superb Stringer Bell on The Wire, warrant casting him as Mike.

Timothée Chalamet is the cinema’s newest golden boy, and his presence benefits most of the films he’s involved in, for various reasons.

It may seem counterintuitive considering Chalamet’s lack of experience playing vicious killers. Still, his characters have a rawness to them that is necessary to Todd Alquist, one of the most disturbing villains ever devised.

Lydia’s typical mood may best be described as worried since she quickly devolves into a paranoid mess if she suspects even the tiniest thing has gone wrong.

Lydia’s nervous personality makes it unusual that she would align herself with a drug lord and assist him to run his empire. Still, it’s evident that she is propelled by a drive that is completely contradictory to her outward nature: shrewdness.

Alison Brie can convey Lydia’s eccentricities while also channeling her darker personas, such as Sarah from Horse Girl (2020).

Mahershala Ali has appeared in some seemingly unconnected films and television shows, including Moonlight (2016), Green Book (2018), The 4400, and House of Cards.

However, many of his performances include undercurrents of mid-life revolt, which Hank Schrader encounters throughout his Breaking Bad plot arc.

Hank’s cool demeanor is admirable but frail; it breaks down frequently and for unexpected causes. It’s almost as if Dean Norris is portraying a weak character within a strong one, which puts Ali in a good position to handle this role.

Skyler begins her tale as a devoted wife and mother, but her character begins to disintegrate about the time she learns of Walt’s secret “enterprise.”

She begins as a resentful wife but is eventually compelled to become a criminal to protect her husband (the only effective way to keep her children safe).

Viola Davis of How to Get Away with Murder is the only performer who understands Skyler’s emotional architecture.

In reality, Annalise Keating’s character can easily be changed into Skyler, though Viola’s interpretation will be very different from Anna Gunn’s.

Melissa McCarthy is well-known for her comedic genius, which makes her an excellent choice for Marie.

The kleptomaniac sister of Skyler White is a severely post-modernized version of characters prevalent during the Golden Age era, particularly in the screwball comedy genre.

Actresses like Katharine Hepburn, Claudette Colbert, and Barbara Stanwyck could have played Marie Schrader, but given the setting and historical period of Breaking Bad, Melissa McCarthy and her sense of self-deprecating comedy are the best fit for the part.

Walter White’s persona is not as straightforward as he appears, as spectators realize almost immediately as the star, antihero, and villain rolled into one.

Most performers would find the change from humdrum schoolteacher to megalomaniac drug lord a tremendous task – Nathan Fillion being an exception.

In Buffy, the Vampire Slayer, Caleb, his evil priest, is strikingly similar to Walter in that they are both in it for the ride (and nothing else).

Fillion understands how to fine-tune his character to elicit the vilest reactions from his audience.

10 Popular Book Series That Disappeared After The First Movie

Rockstar: Movie Defined By Its Songs

Rockstar: Movie Defined By Its Songs