Death on the Nile Review: A whodunnit movie with Agatha Christie’s magic

Death on the Nile is now streaming in cinemas and Agatha Christie's fans couldn't wait to dive into the mysterious and thrilling world of Christie-inspired movies. But, did it achieve the same level? Read the review to find out about the movie. 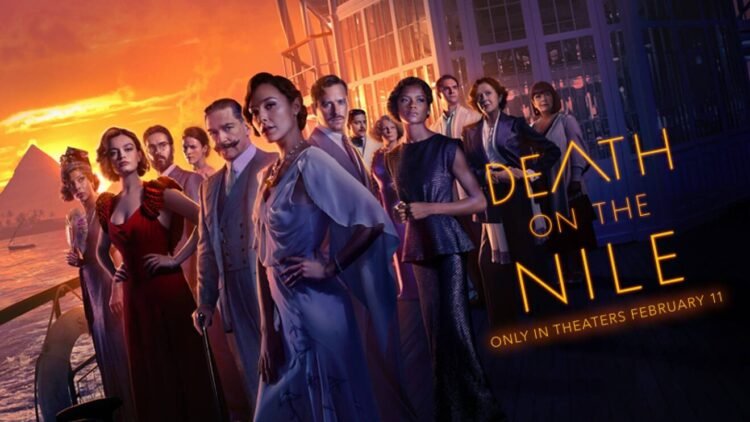 Agatha Christie or the Queen of Detective Stories built a level of suspense and enigma that is still unparalleled. One of the central characters of her story was a detective with a striking mustache named Hercule Poirot. Since the ’80s several filmmakers have chosen Christie’s story to adapt them into movies.

In 2017, the same was done by Kenneth Branagh, a renowned actor who also directed the film Murder on the Orient Express. He took the leading role of Poirot in the film and it was successful in gathering acclaim from the audience.

After a remarkable endeavor, fans were waiting for another adaptation based on one of the most famous books of the late author, Death on the Nile. For this picture, Kenneth returned in his role alongside Gal Gadot, Ali Fazal, Annette Bening, and Russell Brand among others. However, Death on the Nile was the third attempt to make an adaptation.

The setting of the movie is better than the previous one even though it wasn’t actually shot in Egypt with an equally incredible cast and glamorous dressing that also captured the essence of the old-fashioned lifestyle. Nevertheless, the movie is monotonous and begins in an uninteresting manner. Besides, the slow pace of the film also heightens the tedious duration of the storyline.

Those who enjoy Agatha Christie’s work anticipated knotted puzzles and past secrets to slowly build up the plot where Poirot is gradually amassing all that is necessary to catch the culprit. But, the movie is missing Christie’s elements and it eliminated some of the familiar characters from the story.

There is no Colonel Race, the fierce young nobleman, Mr. Fergusson, and Dr. Bessner have been integrated to form Dr. Windlesham. Mrs. Otterbourne is no longer a lunatic writer of sensual stories with drinking issues and about zero readers but now she is a jazz singer with a successful professional life and captured, wait for it, Poirot’s heart?

Despite all these enormous changes, the central theme and mystery remain the same. If you haven’t read the book, the casting of characters and their subtraction won’t be a big issue.

So, the story follows Jacqueline and Simon who are desperately in love but with penniless pockets. Jacqueline’s friend Linnet is a rich heiress and she already has something against her naturally because Linnet could have hired Simon to solve their problems. Unfortunately, even when their issue resolves, Simon falls for Linnet and breaks off their engagement. An angry Jacqueline follows the two to Egypt where they go for their honeymoon.

Amidst all this chaos, a murder occurs aboard a luxury steamer and we have Poirot to solve it for us.

Emma Mackey, your Maeve from Sex Education impeccably plays the role of Jacqueline. Gal Gadot also fits into her character and Ali Fazal features as Linnet’s crooked lawyer. However, Kenneth does not meet our expectations of portraying Poirot and you can see clearly how well he played the role in the preceding film.

Anyhow, Death on the Nile has the mystery magic of a classical author and that’s the most vital point of watching it. The movie is wonderfully structured, enhanced through its exquisite actors, and will keep you engaged for most of the parts.

10 Best Anime Villains of All Time

10 Best Anime Villains of All Time