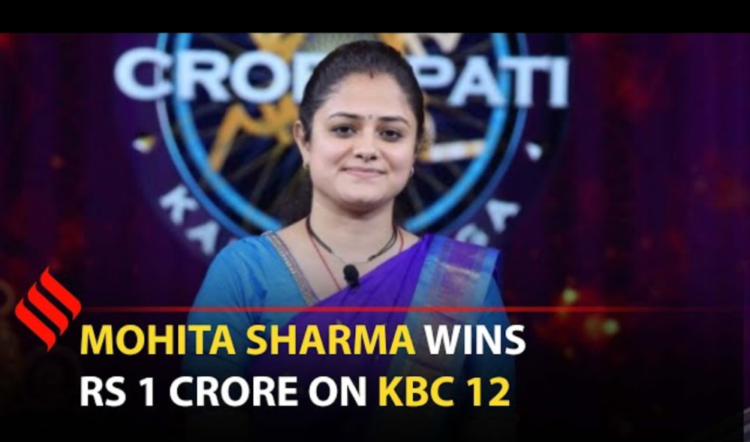 Kaun Banega Karorpati or simply known as KBC is one the most watched and top shows of India! Even after 20 years, we cannot get enough of this show! It was first telecasted on 3rd July 2000 and since that time we have seen a number of determined contestants who have proved there talent and worth. Their story, hardships and determination is what keeps their audience stuck to the show! It encourages us to live up to our dream and makes us believe that anything is possible.

The Second Angle here brings you 5 magical moments from the KBC journey of recent crorepati of KBC, Mohita Sharma.

She is an IPS officer. Before her, a few more civil servants participated in KBC. Like in 2017, Anuradha Agarwal and Dr Vinay Goyal won 15 lakhs and 12.5 lakhs respectively.

She tied knots with her husband Rushal, an IPS officer, currently serving as the Assistant Conservator of the Forest in Jammu, one year ago. They had an arranged marriage and he calls her “Mitu”. She gradually found his interest in KBC and thus decided to achieve what she has today!

She said and I quote,

2) Dress the way you want to impress.

Her uniform is nothing but her identity!

She is the assistant superintendent of police and has two police stations in Bari Brahmana and Jammu under her. The respect and pride she had for her khaki is well depicted in her poem that she recited:

She believes that the law always takes its course.

3) The obstacles were worth it.

She navigated every obstacle in her path from taking engineering to finding a whole new field!

She gave UPSC exam in her 4th year of college as a suggestion by her principal and refused 3 job placements to achieve her goal. Due to financial issues, she had no coaching and it took her 5 years to get to the cream level and has dared not to look at her past ever since. Even after achieving so much, she thinks that education has no boundaries and is now pursuing Environmental Law, only to become National Security Advisor like Ajit Doval.

Her story is one to be inspired by!

4) Parents nothing but a backbone.

She is the only child of her parents and has claimed that her parents were nothing but supportive. She has depicted her parents as “the brand ambassadors of बेटी बचाओ बेटी पढ़ाओ” !.

Her father was the one who supported her to go for UPSC exam even after taking voluntary retirement in 2001. If it wouldn’t have been for her parents, she would be somewhere in engineering!

And the moment you have all been waiting for is here! The computer Ji in KBCasked the question for 1 Crore, ‘Which of these explosives was first patented in 1898 by German chemist Georg Friedrich Henning and first used in World War II?’ and locked her answer, “RDX” and guess what? It was RIGHT or as Amitabh Bachchan has said, “sahi jawab”. Now just her 7 crore sawal was left. It does not matter if she wins that or not! After looking at what she has achieved all I can say is hats off! There no going back from saying how much she has achieved and how much she has inspired others!

Millionaires out of the blue: 5 people who struck gold overnight

5 Statistics about Indian billionaires that will shock you

7 Suspense Psychological Thriller Movies To Watch This Weekend On Netflix

7 Suspense Psychological Thriller Movies To Watch This Weekend On Netflix