She debuted in the industry with the songs "Ishq wala love" and "Jiya Re," which were featured in the films Student Of The Year 2 and Jab Tak Hai Jaan, respectively. There was no turning back for her after that. 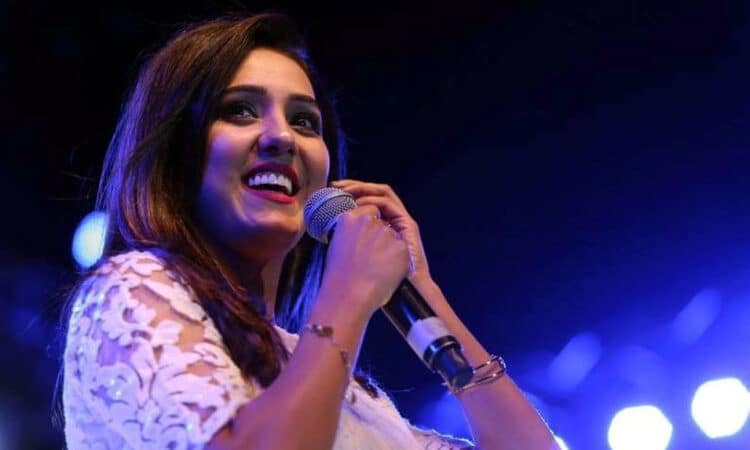 Neeti Mohan is one of Bollywood’s most famous and brilliant female singers, providing devoted cinephiles like me and you with a plethora of songs that instantly improve the mood.

She’s demonstrated her versatility by crooning a variety of melodies in many regional languages, in addition to producing some timeless Hindi ballads.

The song had such an impact on our lives that we danced like no one was looking, with an abundance of joy ringing in our hearts.

The upbeat song depicts all of the usual and dramatic features of lovers attempting to flirt and court a girl who is unconcerned about their sentiments.

The upbeat composition, which features Ranveer Singh, Priyanka Chopra, and Arjun Kapoor shaking a leg, is the perfect cherry on top.

Neeti Mohan received numerous accolades and prizes as a result of this song. We can’t stop moving and grooving because the beats, combined with her vibrant and engaging vocals, generate a cheerful tone.

Shahrukh Khan, Anushka Sharma, and the Himalayas were featured in this wonderful song. It’s no surprise that this song spent weeks at the top of the charts.

Vishal Shekhar performed an amazing job on all of the Student of the Year songs. Varun Dhawan, Siddharth Malhotra, and Alia Bhatt were introduced in a glitzy ‘Karan Johar Special.’

Ishq Wala Love is a touching song that appears when the three key characters realize they are in love. Salim Merchant and Shekhar Ravjiani’s vocals enclosed Neeti Mohan’s delicate voice.

The song was one of the film’s major highlights.

The best aspect of this dreck is the music. The music of this failed film stands out and is still on the playlists of Hindi film fans all over the world thanks to Neeti Mohan and Armaan Malik.

The song has become a club favorite thanks to Neeti’s silky, breezy rendition.

This is one of her underappreciated tracks. This song blends in better with the rest of the album’s peppy and highly orchestrated pieces.

However, this one has a certain freshness to it, thanks to her unrivaled voice.

The song from Padmavat isn’t widely known or discussed. But, hidden beneath the glitz and glam of Ghoomar, this is a stunning song that deserves to be included.

What would we do if we didn’t mention this song? The catchy tune quickly gained popularity and shattered records.

Deepika Padukone’s powerful and at the same time charming face in the song was perfectly captured by Neeti.

This Brothers’ track is extremely underappreciated. As the song begins, Neeti’s voice comes across as a breath of fresh air.

With such a powerful and soothing voice, the song becomes even more interesting.

Through her version of this magnificent song from Student Of The Year 2, Neeti’s voice exuded inexhaustible energy and enthusiasm.

She did the music and the lyrics justice, as she usually does with every song.

Because of the lyrical beats and, of course, Neeti’s fantastic voice, everyone was singing along to this song. She had the audience’s hearts in her hands in no time.

Also Read: Our Favourite Movies Of 2021

10 Most Inspirational Songs Of All Time

10 Most Inspirational Songs Of All Time