Releasing just around the time of the festival celebrating the bond between brothers and sisters, Raksha Bandhan is a family comedy starring Akshay Kumar in the main role. 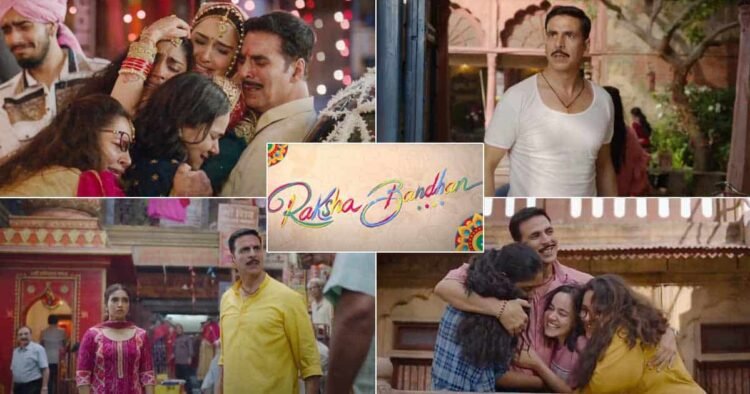 “Sometimes being a brother is better than being a superhero”— this is what the trailer of Raksha Bandhan begins with. The title itself suggests that this movie is based on the bond between brothers and sisters, one that is considered pure and profound in our culture.

Raksha Bandhan is a story of a man, who is also the brother of four sisters. Lala Kedarnath is an owner of the pushing gol Gappa shop who is supposed to take care of his sisters and get them married as soon as possible.

Set in Delhi, showing the areas of Chandni Chowk, the story is of a lower-middle-class family where the social stigmas still stick.

Lala Kedarnath is surrounded by pregnant women who believe eating gol gappa from his shop will help them to give birth to a baby boy.

As he promised his mother to marry off his sisters before tying the knot, Lala Kedarnath’s lover Sapna, played by the very talented Bhumi Padnekar, is often fighting him due to the growing pressure from her father. Sapna’s father has already gathered enough money to give her dowry and marry her.

Portraying a society where young girls are considered a “burden” on the family, the Bandhan between the brother and his sisters soon takes the shape of a social commentary on dowry.

Unable to collect enough money to settle the dowry of his sisters, Kedarnath finds himself in difficulty finding suitable matches for them.

The sisters are a unique combination where each has a different disposition. The mature and sensible Gayatri, chubby and foodie Durga, tomboy Saraswati and dark-skinned Laxmi- it becomes even harder to find partners for their strong personalities.

Beginning with the cast, Akshay Kumar played his part really well, as he is known to do in comedies, whether it is a helpless brother trying his best to settle his sisters in a stable family or a devoted lover asking Sapna’s father to give him the time he needs— Kedarnath’s character is wonderfully crafted and bought on screen by Akshay. Bhumi Padnekar too played her part well as Sapna.

The four sisters also played their part well bringing out the comedy and drama as it is needed. Seems Pahwa has become an important part of Hindi comedies and did her job well as a humorous matchmaker.

Directed Aanand L Rai and writer Himanshu Sharma collaborated once again after Atrangi Re! Rai created a light-hearted first part with sibling bonding showing the fun and breezy side of Lala’s family as his sister fights and teases each other.

The second part is more emotionally charged, diving into the problems of small-town families in India and the struggles their daughters face.

Himanshu Sharma develops the characters really well giving them the time to shine and appeal to the audience. Himesh Reshammiya’s soundtrack is nothing special and merges with the story.

Coming to the plot is mostly a social commentary showing the influence of dowry on Indian households. The emotional story will be able to have its impact on you but it could have been more entertaining.

The tone becomes monotonous and repetitive and makes the audience wonder if it could have been funnier and crispier.

Raksha Bandhan is nothing extraordinary. The two-hour-long film can be tedious at times but emotionally touching as well.

However, Rai makes up for all the shortcomings with an intense and moving ending giving the audience the satisfaction of sitting through the movie. Raksha Bandhan is a good film that you can watch over a boring weekend for the generic Bollywood-comedy vibe.