The Rings of Power is an upcoming fantasy drama based on the story by J. R. R Tolkien. Set in Middle-Earth the series looks promising as it remembers the legacy of The Lord of the Rings for Tolkien. 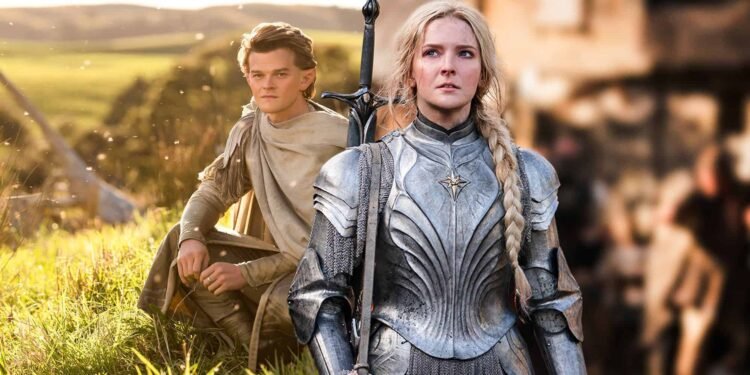 A name that is distinguished and remembered in the world of fiction and especially fantasy novels, J. R. R. Tolkien was a famous writer, poet, and philosopher whose work marks the resurgence of fantasy novels.

He is called the father of modern fantasy literature, often praised for his books, The Hobbit and The Lord of the Rings.

It was strange that with a name that big, it took these many years to finally bring Tolkien’s acclaimed works to screen.

The Hobbit and The Lord of the Rings trilogy were directed and written by New Zealand filmmaker Peter Jackson and were unsurprisingly glorified around the globe.

The enormous success of these movies made Peter Jackson the third highest-grossing director of all time while Oscar-winning movies were in the top-grossing franchise.

After the release of the Hobbit trilogy in 2014, LOTR fans were surviving on old movies. While Potterheads got the Fantastic Beast film series and Star Wars fanatics were watching the expanded movies, LOTR had to put up with early 2000s films.

It was expected that the increasing popularity of TV shows and series in recent years will definitely call for a new television series around the world created by Tolkien. Fortunately, a new series set in the Middle-Earth was in the making that would be released on Prime Video.

J.D. Payne and Patrick McKay have taken the task of carrying Jackson’s legacy forward with a series titled The Lord of the Rings: The Rings of Power.

The series of events will be thousands of years before the incidents of the Hobbit and The Lord of the Rings as it is set in the Second Age of the Middle Earth.

We are basically transported to the world where it all began- the forging of the rings, the story behind them, and how they ultimately instigated consequences.

It marks the origin story of one of the most famous villains of the series- Sauron. We get to see elves, dwarves, humans and a lot of other creatures battling against each other, for each other in the trailer as kingdoms crumble down and heroes rise to save their people.

We see Galadriel trying to unite the people of the community together amidst the growing dangers. The visuals, the sound effects, and the setting are undoubtedly impressive.

However, fans of Tolkien are calling out the trailer for the cringe and generic dialogues they have added in the series.

However, from the trailer, it appears the creators have added their efforts to bring a new cinematic experience for the audience with a bold and ambitious series that specially focuses on cinematography and visual content.

The ensemble cast is amazing featuring Robert Aramayo, Morfydd Clark, Nazanin Boniadi, and Charles Edwards, among many others.

The series is already measured to be the most expensive TV production with high expectations from some of the fans who are waiting for its release. The first two episodes of this eight-part series will be available on Prime Video on 2nd September.

The Middle-Earth was meticulously crafted by Tolkien with very minute details that make it even more fascinating. If the directors tried to add every aspect of it to the series, it might have felt like a historical account of Tolkien’s world.

Yes, it was necessary for the makers to add their own vision to it to make it more appealing however we have yet to see if they will be able to find a perfect balance between the works of one of the greatest minds of his times and the series that needs to attract the fans of The Lord of the Rings.