After a long wait for the Lord of the Rings fans, things are finally getting exciting as Prime Video launches a new series named The Rings of Power years after the LOTR movies Wondering whether to watch the new series? Here is a brief review of the first episode titled "A Shadow of the Past" to help you decide. 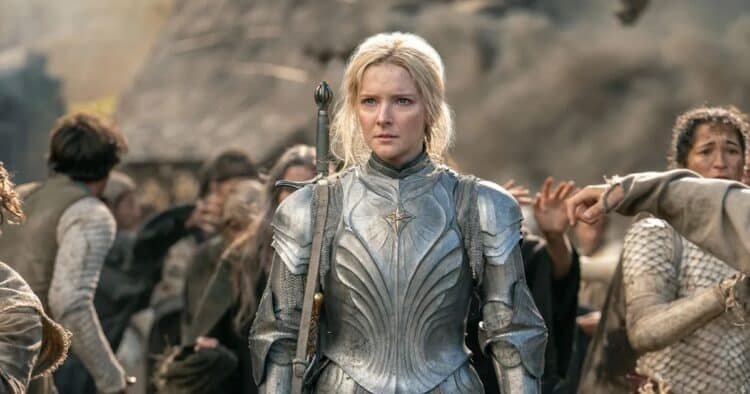 As Peter Jackson’s the Lord of the Rings trilogy was hailed as one of the most wonderfully crafted cinematic pieces with its glorious production and unmatched feat, it gave the audience basically everything they needed from the world of Middle-Earth.

However, as the new series is here and already streaming, LOTR fans will watch it at least once for the sake of re-visiting the realm of Middle-Earth in a re-imagined version.

The first episode of this series named “A Shadow of the Past” introduces us to the voice of Galadriel as we watch her younger version making a boat and slowly leaving it in the river to be carried away. “Nothing is evil at the beginning” her voiceover whispers.

Just as she is watching her boat go away peacefully, a young boy decides to bully her and damages the paper boat by throwing a stone.

As an angry Galadriel marches towards the boy ready to be bad-ass with him, she is stopped by a man who looks like he just came from the David Bowie family. The guy is Finrod, Galadriel’s brother.

The two shares a poetic conversation where Finrod, accentuating his words through his accent, tries to tell her the difference between a stone and a boat.

One of the earliest shortcomings of the series you’ll notice is the poor structure of dialogues. Words are crammed but set in a way to sound like a complex riddle is being told. However, most of the time they don’t even make sense and also fail to leave an impression on the audience.

Anyway, the scene cuts back to the present where Galadriel tells the people of the string of events that led to the present situation. A war in the Middle-Earth that lasted for centuries left it in tatters.

The antagonist of this war Morgoth was defeated but his Orcs had proliferated the Middle-Earth. Sauron kills Galadriel’s brother and the latter picks up his knife promising to kill her foe.

Galadriel’s journey to chasing Sauron thus begins. Her quest to find him is so passionate that at one point she is ready to let her own people die in search of him. She is very hard to like right from the beginning.

Blinded by her aim, she doesn’t care about the goodwill of her company, who after a certain point, regrets following her. Even if she can single-handedly defeat a snow troll, she doesn’t strike to be a leader one would follow.

Thondir denies following Galadriel and says that they should initially inform about this the High King. The others agree with him as they think the danger looming around may be more intense than they can actually see.

The episode also gives us the first look at Harfoots, the ancestors of Hobbits, who are a resourceful community. Among this group, our main character is the rebellious Nori.

Even after warnings from her mother to not venture into the outer world as it is not in their nature, Nori runs away and begins her exploration.

Her mother also points out that their group has been safe for so long and has survived the disasters because they have not journeyed to the dangers of the world.

As Galadriel returns home clad in her armor, the High King announces that the evil forces are gone. However, she is not elated on hearing the news like others and rejects the gift offered. She plans to chase Sauron and decides to go alone if no one accompanies her.

In the South Lands, the episode shows the forbidden but blossoming romance between an elf and a human.

The two lovebirds are Arondir and Bronwyn, who share some warm moments together until Medhor reminds them of the scarce love stories in the history of humans and elves that have survived.

Just as the episode is about to end, an asteroid is seen flying across the sky, which was first predicted by Sadoc. All the main characters of the show watched it however Nori is the first to go to the place and find out that the asteroid is actually an old guy.

The episode being more than an hour-long had a good pace. Nevertheless, it was unable to create the tension that may have spiced things up a bit.

Morgoth and Sauron are largely ignored in this episode instead we get to see only Galadriel trying to vanquish the evil forces.

The Rings of Power, being a spin-off of the Lord of the Rings, arrived on the OTT platform with a lot of burdens. After years of speculation and days of hard work, the series was made with a lot of anticipation.

However, the big budget with which it was made adds to the baggage of this series, being the most expensive series for the platform, was this a risk worth taking?

Also Read: Movies And Shows Coming Out In September