Returning after more than a decade was the sequel of Bhool Bhulaiyaa. Starring Kartik Aaryan, Tabu and Kiara Advani, Bhool Bhulaiyaa 2 was one of the most anticipated releases of the year and is now streaming in Cinemas. 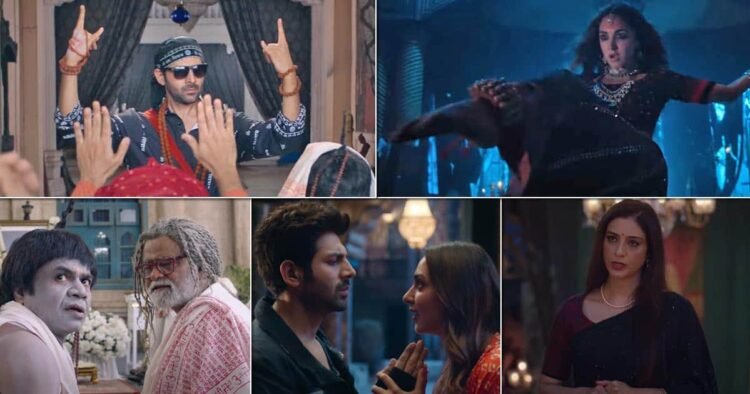 The film opened at Rs 14.11 on Friday and performed well at the box office for the last three days. The lead actor, Kartik Aaryan, shared a tweet stating that he himself was unable to get a ticket.

The movie, being a spiritual sequel to Bhool Bhulaiyaa, is set in one of the Multiverse of Manjulika, the evil spirit who is supposedly trying to harm the Thakur family and is entrapped by a group of priests inside the Haveli in Bhawanigarh, Rajasthan.

Somehow, Reet Thakur (Kiara Advani) ends up inside the Haveli with Ruhaan Randhawa (Kartik Aaryan), a fraud psychic, where she persuades Ruhaan to play the role of the spirit to convince her family to break Reet’s engagement with her fiancé, whom her sister likes.

Their plan to use this evil spirit trick to fool the Thakur family keeps us entertained for two hours. In this entangled mess where Ruhaan becomes Rooh Baba enters Manjulika, the wicked spirit of Bhool Bhulaiyaa world.

The story writer, Aakash Kaushik, did a good job to keep the script and plot line of this sequel almost identical to the preceding one while changing the characters altogether. Although Madhu Muttam’s story had an emotional perspective, this one is based purely on humor to satisfy the audience.

For sure, you are going to see a lot of “pulling legs” and “feets moving backward”, the generic horror scenes in this genre but they are executed deftly to either portray mockery or ludicrous one-liners.

Manu Anand deserves appreciation for his cinematography adding excess gloominess although luckily, it ended up working in his favor.

When it comes to the acting front, Tabu outshines her role as Manjulika, often overshadowing other characters with her role. Tabu created the charm required to match Vidya Balan’s role.

Kartik Aaryan also performed well with determination, evident from the fact that he actually lost his voice when shooting for the climax. It is indeed a difficult job to be able to meet the expectations, especially after Akshay Kumar’s masterpiece but Kartik’s Ruhaan manages to establish his own character competently.

The weakest character was Reet played by Kiara Advani who was not able to explore her role much due to the limited space she was given. Rajpal Yadav & Sanjay Mishra amplified the humorous element in the film with their potential.

In the end, Director Anees Bazmee was successful in keeping up with the hype connected with the prequel.

While Priyadarshan’s Bhool Bhulaiyaa is one of the topmost films of the 2000s and people expected that this spiritual sequel will lead to a great disappointment owing to the uncountable 2.0s in the Bollywood that ruined the original version.

Packed with humor and horror in the right order, Bhool Bhulaiyaa 2 is proof of movies in this genre being good enough and meeting the expectations of the audience if they follow what people really want- comedy!