Based on the real-life incident, Runaway 34 follows the story of Captain Vikrant Khanna played by Ajay Devgan. Free from unnecessary melodrama and suspense, the film sticks to its plot and doesn't waiver from the storyline. 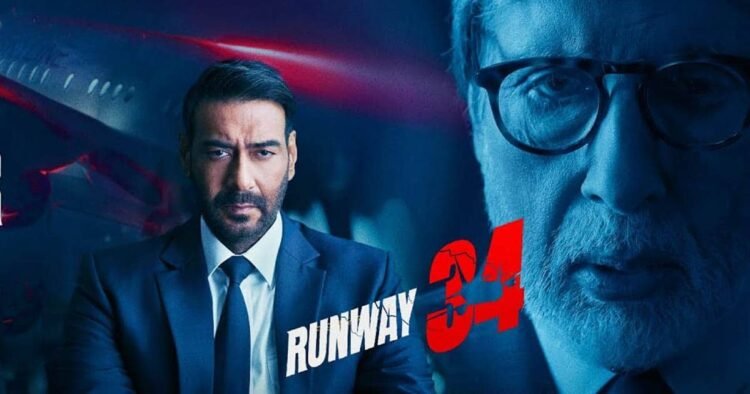 Runway 34 is a thriller movie that follows a high-flying pilot, Captain Vikrant, and his attempt to use all his experience and expertise to safely land a flight from Dubai to Kochi amid low visibility and bad weather conditions.

Written by Sandeep Kewlani and Aamil Keeyan, the story is based on genuine events and is unique in the sense that it deals with a turbulence-affected flight and its consequences. In Bollywood, there has never been a film like this before.

The writing by Kelwani and Keeyan Khan is quite good in the first half, especially in the scenes around the plane. The writing after the intermission, on the other hand, could have been better and less talky. The talks between Sandeep Kelwani and Aamil Keeyan Khan are razor-sharp. A few one-liners are sure to make the audience laugh.

The direction by Ajay Devgn is good. He should get bonus points for holding the audience’s attention throughout the first half.

It has to be seen to be believed how he has maintained his focus on the events in the cockpit as he strives to safely land in Trivandrum. The point of intermission is deserving of applause.

The addition of Narayan Vedant in the second half heightens the tension. The courtroom drama, which should have been equally suspenseful, however, drags at this point and becomes too talk-heavy. However, there are a few instances that stand out. It is, nevertheless, far too long.

Except for the forced emotional backstories of a few passengers on the flight, the first half’s safe-landing component features a few electrifying sequences (one of our favorites is when Rakul’s Tanya simply freezes when she realizes their landing is in grave danger).

Rakul Preet plays the role of co-pilot Tanya. You get to see some scenes of the famous YouTuber CarryMinati who takes the role of a young man who records every action inside the plane.

Another character of an aviation journalist puts an intense question in front of the Captain- If Kochi has bad weather, why not go to Bangalore and then opt for Trivandrum, which might have equally bad weather.

Hence, the first half of the movie is crammed with intense scenes in the middle of torrential rain, falling fuel, soaring winds, and the plane flying towards impending disaster.

The narrative instability occurs in the second half, with the courtroom sequences, which were supposed to be the story’s lifeline, turning out to be incredibly generic.

Ajay Devgn as a filmmaker fails Ajay Devgan as an actor because he damages the performer in him halfway between doing both.

This isn’t the first time that a prominent Bollywood star takes on the direction. After the failed attempt in U, Me Aur Hum and Shivaay, Devgan’s recent film is a treat to the audience.

Ajay’s Captain Vikrant is a one-dimensional character who does nothing but be cocky throughout the film. Because of the terrible writing, the emotions come across as forced.

In the second half, Amitabh Bachchan appears to continue doing something quite similar to Badla (and even Pink to some extent). In’shudh Hindi,’ you get the usual package of baritone-heavy dialogues, but we’ve all seen a better version of the same before.

Rakul Preet continues to be the most humanitarian of the characters. Even though her character has little say in the plot, she compensates by performing well in any role she is given.

Also Read: Movies That Live Rent Free In Our Heads

Movies That Live Rent Free In Our Heads

20 Best Quotes From Tenet That Will Never Leave Your Mind

20 Best Quotes From Tenet That Will Never Leave Your Mind