Veer Zaara – A Story Through Its Songs

In the times of remixes and remakes, how often do we come across movies that use songs as a tool to adhere to the story? Veer Zaara was one of such kind, let's have a look at the movie's songs to tell the story of Veer and Zaara. 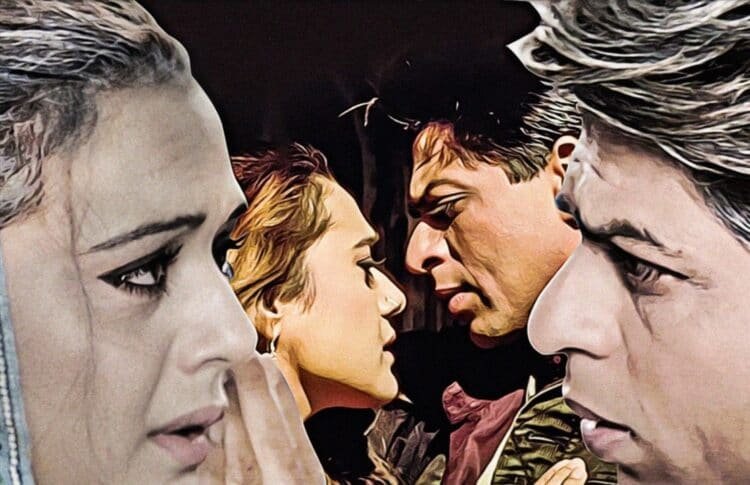 ‘Veer Zaara’ truly was one of its kind. There hasn’t to date been a movie that has touched as many hearts as this one did. It stood the test of time and how. The story, the characters, the scenes, the songs, the dialogues have all aged like a fine wine that we cannot help but take a sip from every now and then.

The movie is known for the crackling chemistry of Shahrukh Khan and Preity Zinta as Veer and Zaara but what strikes a chord with everyone is the phenomenal music.

The songs in the movie, unlike recent times, were used to add to the story and not take away the essence of it. The songs fit like puzzle pieces to the emotionally charged scenes.

The lyrics add so much depth to the scenes that it almost feels incomplete to imagine one without it.

Here’s looking back at this cultural phenomenon through its songs:

The movie starts off with a beautiful poem narrated in the voice of Yash Chopra, which sets the tone right.

Following the poetic introduction, the song Kyon Hawa plays out as we are taken on a journey of the beautiful landscapes across both India and Pakistan. This is probably the best way to hint at how the story might unfold.

It is always a task to introduce a character through a song without giving away too much of them through the lyrics.

But as we are introduced to Zaara, we anticipate her bringing fireworks on the screen. We love how chirpy, happy, and full of life she is. It adds yet another layer to the movie whose theme is a greater contrast to this song.

They say first impressions matter, and Veer makes sure that Zaara has the right one about his country. As he takes her on a journey through his village and its people, he sings about how life in his country is.

And it wouldn’t be wrong to say that the audiences, along with Zaara, slowly fall in love with the nation with its picturesque landscapes.

India is known for its festivities, and this song captures the spirit well. Veer takes Zaara to the Lori celebrations, and there she’s introduced to the customs and people of a strange country.

She is not only amused but is also delighted to see the colors around her. She embraces this newness and becomes a part of it.

Now that the two hearts have started growing closer, it is painful to see the separation. As Zaara takes Veer’s leave, she’s perplexed about her feelings for him.

The sight of her fiancé doesn’t ease her already torn heart. And as we see the two walk away from each other, step by step, the song’s lyrics intensify the pain.

It so aptly addresses the feelings, the separation, and the unsaid words.

Zaara, on returning to Pakistan, pines for Veer. His memories haunt her, and she can barely close her eyes without dreaming of him.

But she eventually succumbs to the institution of arranged marriage as she has no way out.

She can feel his presence around her and the song ‘Main Yahaan’ beautifully captures the emotional turmoil she is going through.

What relief it must be to the torn and bruised heart of Zaara to finally see Veer, and that too right before she was going to put a ring on the relationship, she never wanted to be a part of.

The setting of a mosque, the heavy rain, and the declaration of Veer’s love simply by his presence right then and there are aptly captured by this song.

Following this is an even painful separation of the two as their individual duties bind them.

Some fateful plans, struggles, separation, and 22 years later, the two lovers find themselves standing in front of each other.

It was destiny that tore them apart, and it is still destiny that brings them back to each other, and what better expression of this long-awaited reunion than a song like ‘Tere Liye’.

As Veer and Zaara see each other after what seems like a lifetime later, their emotions are neither held back nor the audience. Tere Liye concludes the situation, the movie, and the story perfectly.

It is beautiful to see a movie that begins on a poetic note and culminates on one too.

The heartbreaking poem in the shaky, emotional voice of Shahrukh Khan gives us an insight into the painful 22 years of Veer as a political prisoner. To say the least, we have goosebumps every time.

Also Read: 6 Music Documentaries You Must Watch on Prime Video

9 Things Peer Pressure Compels Us To Do

9 Things Peer Pressure Compels Us To Do