Stranger Things 4 Vol 2 is finally streaming on Netflix. The finale of this season is more than 2 hours long and has a lot of surprises waiting for you. The ending has been described as both promising and anti-climatic. 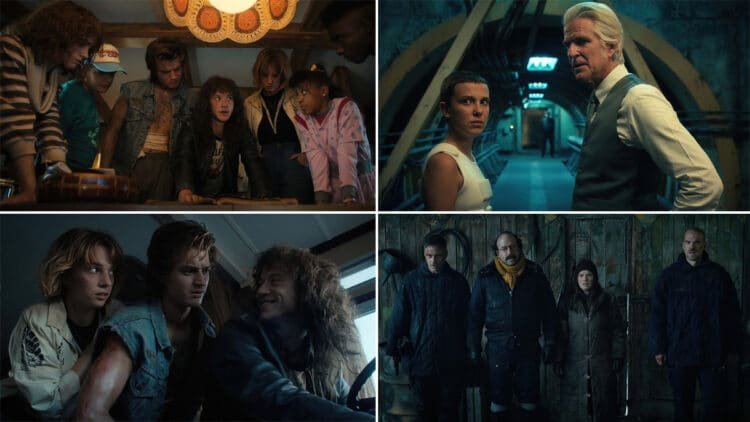 In fact, it was reported that Netflix crashed upon the release of Stranger Things. The series has maintained its fan following over the years.

With a near-perfect cast and a storyline that always reminds us of the ’80s, Stranger Things has countless reasons to be fans’ favorite. No wonder Running Up The Hill singer Kate Bush broke three Guinness World Records after her song was featured in the series.

Episode 8 of Vol 2, named Papa, primarily focuses on Eleven and Dr. Brenner. Eleven gains her powers and asks Brenner to let her go.

However, Brenner forces her to stay back and Eleven tries to attack him when the U.S Army attack their laboratory. Eleven somehow escapes and meets Jonathan, Argyle, Mike, and Will.

Nancy is still inside the Upside Down where Vecna shows her Hawkins’ images from the future where it is being rifted apart. Brenner also told Eleven that One was trying to make holes in the barrier between the two worlds to enter into the other dimension.

As Nancy is thrown back into the world, she retells the entire story to the gang who figures out that Vecna needs to kill four people to enter into their world.

Max urges the group to allow her to lure Vecna so that the gang can go to the Upside Down to destroy his physical body during its lowest point.

Hopper, Joyce, Murray, Yuri, and Antonov escape from the Russian prison after finding demo dogs and Demogorgon being studied in the research facility. Hopper and Joyce do not have much screen time in these episodes however they play their part well.

The last Episode, The Piggyback, is 2 hours 30 minutes long- the longest episode in the history of Stranger Things- and it is the best finale as well. Duffer Brothers wonderfully crafted this episode balancing between emotions and horror.

Another important aspect of this episode was its disastrous ending. The finale did not end on a happy note even if Joyce and Hopper returned safely and the latter reunited with Eleven.

While the gang fights Vecna by making a plan to lure him, they are also combatting their own emotions. Lucas and Max are finally clearing the air and coming closer.

Steve and Nancy are fighting their feelings for each other while sparks burst all around them. Dustin and Eddie have a very adorable bond blossoming and well, Robin is just scared to go to the Upside Down once again.

The unique characteristic of Stranger Things is to depict horror, gore, and darkness parallel to humor, sarcasm, and feelings giving us a story that keeps us hooked to the screen for almost 3 hours. It was perfectly paced with amazing visuals and cinematography.

While certain parts of the finale do not resonate with what the fans wanted, it is still remarkable how they managed to connect overstuffed episodes with the finale and not lose the viewer’s attention for once.

One of the best scenes from the finale is when Eddie has a metal concert in Upside Down to attract the bat-like creature. Eddie’s character was short-lived and we did not get to learn much about his background story. Still, he managed to be one of the heroes of this series.

The finale seemed perfect to the point that another season appeared to be unnecessary. Let’s hope that the creators do not end up ruining the story by prolonging it.

However, the old seasons did not definitely have the creatures from the Upside Down openly roaming in Hawkins and it will be interesting to see how our favorite kids will save the world once again.