On June 3, the highly anticipated The Boys season 3, the smash-hit Amazon series will premiere on Prime Video. The release date of the satirical superhero series is June 3, according to the creators. Each Friday after that, new episodes will be released, leading up to the season finale on July 8. 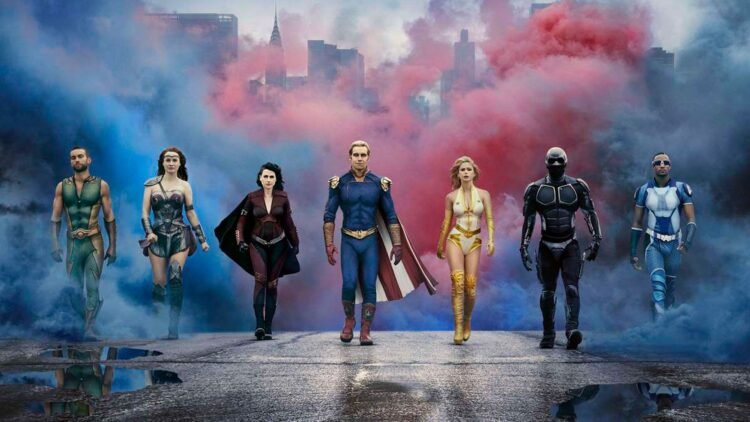 The Boys is based on Garth Ennis and Darick Robertson’s New York Times best-selling comic.It follows the titular vigilante squad as they battle super powered individuals who abuse their powers. Seth Rogen, executive producer of the film, remarked at Comic-Con: At Home in July 2020: “Because this show has fans and it is watched by people like you, they have decided to renew it. So, if you like The Boys, you’ve got more of it. Thank God.”

But what awaits us in the next chapter(The Boys Season 3) ?

There’s a lot to catch up on before season three airs on Prime, including frequent updates from the cast and crew, exciting new additions, wardrobe reveals, and rare behind-the-scenes chat.

Filming for the third instalment began on February 24, 2021, and the third season was officially completed on September 17, 2021.

The second season premiered on Prime Video in September 2020, and episodes were drip fed until the big finale on October 9th.

Despite the variances, we do know that during seasons one and two, the time between the end of filming and the showing of the season was roughly nine months. This points to a summer release in 22. What’s more, guess what? Season three will premiere on June 3, 2022, Announced on January 7.

That all appears to be very official and irreversible, which is nice, but we all know how the television landscape has changed in recent years, and things can change on a dime if something dreadful occurs. (Of course not, but if the past few years have taught us anything, it’s that…)

We have moles in Vought International, a spy under Congresswoman Neuman’s desk (with a backup in case their head explodes), secret cameras in the Haitian Kings’ bunker, and a trained mouse under the floorboards in Love Sausage’s room at the Sage Grove Centre in case there are any last-minute changes to the plan. You’ll be notified as soon as we have more information.

Soldier Boy is Jensen Ackles. Ackles’ role is a WWII-era Supe who is supposed to turn Homelander into a docile kitten. Soldier Boy has a long history with Stormfront (Aya Cash), formerly known as Liberty, as a WWII supe.

At the end of Season 2, Kripke told TV Guide, “Yes, he knew her when she was Liberty.” “Because Soldier Boy has been a mainstay of Vought for decades, we’re beginning to sketch out the company’s history. We’re writing the history of Vought and how all the characters intertwine as a result of him being like John Wayne there.”

Four new Supes have entered the fray. Laurie Holden of The Walking Dead will portray Crimson Countess, adding to the expanding number of additional cast members for The Boys. The news was initially reported by Variety.

Holden’s casting comes just days after Entertainment Weekly revealed three additional new Supes for Season 3: Sean Patrick Flanery as Gunpowder, Nick Wechsler as Blue Hawk, and Miles Gaston Villanueva as Supersonic. All four characters will have recurring roles in the future season, but only Gunpowder has appeared in the graphic books that the series is based on, so it’s unclear how these characters will appear and cause havoc.

Your favourites will be back. Karl Urban, Jack Quaid, Laz Alonso, Karen Fukuhara, and Tomer Kapon for Team Boys, and Antony Starr, Eri Moriarty, Chace Crawford, Jesse T. Usher, and Dominique McElligott for Team Supe are all scheduled to return for Season 3 of The Boys.

Victoria Neuman is Hughie’s boss. Hughie (Jack Quaid) was putting some distance between himself and the lads by accepting a job with Victoria Neuman (Claudia Doumit), whom he feels is an honest congresswoman aiming to bring down Vought, as revealed at the end of Season 2. Hughie is in more danger with his new boss/friend Neuman than he is with Butcher and the gang, despite the fact that he is unaware that Neuman is the supe responsible for exploding heads throughout Season 2. Season 3 will provide Hughie a temporary reprieve from being drenched in blood, according to Kripke, but everything will finally go to hell in a handbasket for the canary.

Stormfront isn’t going anywhere. After losing her limbs in a fight with Ryan (Cameron Crovetti) in the Season 2 finale, Kripke wouldn’t say whether we’ll see Stormfront again in Season 3, but he did tell TVG that the hero isn’t dead yet. She’s a live torso in a guarded facility, where her injuries are being treated and monitored. ou. During the first production meeting in April, Kripke provided a glimpse of his reaction to the episode.

Will There Be More Seasons Of The Boys ?

According to speculations, The Boys Season 4 is already in the works and has been greenlit by Amazon. A spinoff series is already in the works, executive produced by a number of people including Seth Rogen and the authors of The Boys comic book series, Ennis and Robertson. The story will follow a bunch of supes that are younger and more hormonal.

“Much like Mork and Mindy spun out from Happy Days—which is a ridiculous and real fact—our spinoff will live in the Vought Cinematic Universe, but will have its own tone and style,” Kripke stated. “It’s our take on a college show, with a cast of fascinating, complex, and occasionally lethal Young Supes.”

16 Movies Too Tragic To Watch For The Second Time