Starring Janhvi Kapoor, Good Luck Jerry follows the story of a girl from Punjab who gets trapped in a drug racket to gather the money for her mother's treatment. 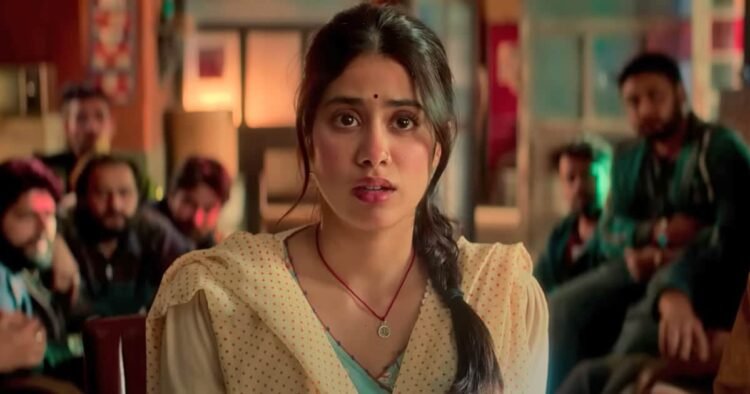 OTT platforms are consistent with not just their web series but movies as well. What works well with the Indian audience is a family entertainer that is just the right amount of humor but has a relevant plot as well.

Good Luck Jerry is a remake of the Tamil film Kolamaavu Kolika that is streaming on Disney+ Hotstar. Starring Janhvi Kapoor in the main role of Jaya Kumari or Jerry, the film is set in Punjab where Jaya lives with her mother and a younger sister.

The family that is shown to have migrated from Bihar is often followed by men around them, especially Jaya who finds herself being courted by them at several moments.

In the original film, the father also has a role to play but here he is just a garlanded portrait and replaced by the nosy neighbor who is always making sure everything is good in a women-dependent household, much to Sharbati’s dislike.

Jaya works in a massage parlor and earns a modest salary. However, they barely make both ends meet so when her mother is diagnosed with stage-two cancer, the two sisters are affected both psychologically and financially.

Jaya is supposed to collect 25 lakh for her treatment. A strange string of events led her to a drug dealer who observes Jaya’s smartness when it comes to delivering drugs.

He offers her a job and Jaya is now stuck in a dilemma. With no other intention other than to gather the money she desperately needs, Jaya thinks of a plan where she is able to evade both the police and outrun the entire mob.

With 100 kilos of cocaine now her job to peddle, Jaya is innocent but not naive and understands that she is getting herself into big trouble. Nevertheless, thinking of her mother’s chemo and radiotherapy, she becomes a conduit to earn money swiftly.

Her cockiness soon drives the man around her to cause mayhem which soon entangles her entire family along with the egg-seller who has a crush on Jerry.

Directed by Siddharth Sen and written by Pankaj Matta, Good Luck Jerry is carried through the performance of the actors. Janhvi Kapoor is a perfect choice for this role.

However, if you compare her performance to that of Nayanthara, who is a more experienced actor, Janhvi fails to capture the emotions that were required of her character and that were seamlessly augmented by Nayanthara’s role.

Sahil Mehta, Jaswant Singh Dalal, and Mita Vashisht also give their best. If you haven’t watched Kolamaavu Kolika, chances are that you’ll like the story of Good Luck Jerry.

The plot is undoubtedly entertaining and different however Jaya’s dilemma is not shown clearly as the predicament the family faces is not explored. As the movie fails to show the bond between the three women, a major aspect of the film is somewhat lost.

Moreover, just when things started to get exciting and the movie reached its climax where the filmmakers laid out all the cards, surprises became fewer and the film went downhill.

As a novice, Jerry had to work her way through the mob and the police. All this could have been more interesting with twists and turns that were left out of the movie.

All in all, Good Luck Jerry is a perfect entertainer to watch this weekend. The jokes and mockeries added in the film make it a hilarious watch with a few universal jokes that makes it more clichéd.

Anyhow, it is inevitable that even after watching the movie you will feel that it had the potential to soar higher and had some weak points that drastically reduced the graph.

Also Read: 7 Fictional Friendships We Wished We Were A Part Of!

7 Fictional Friendships We Wished We Were A Part Of!