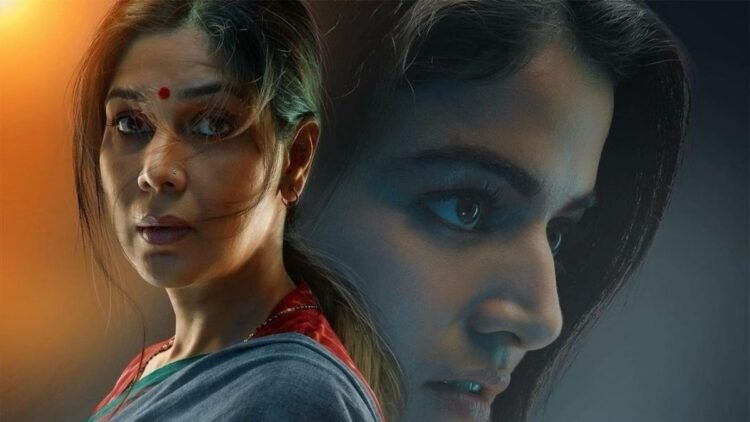 Sakshi Tanwar rose to prominence with her roles in the television world, notably Kahaani Ghar Ghar Kii and Bade Achhe Lagte Hain. Netizens have praised Sakshi for her performance in the web series however the other elements of the web series may not be as good.

In Mai, the story follows a middle-class mother who witnesses the death of her daughter by a truck. Sheel, played by Tanwar, is a volunteer nurse in an old age home in Lucknow and the wife of Yash and mother of Supriya. Sheel is centered around a traditional environment of male dominance and age consciousness.

Supriya is a talented mute girl whose death engulfs Sheel in the underworld of Lucknow. Although everyone around her thinks of Supriya’s death as an unfortunate accident, the grieving woman’s maternal instinct persuades her that the reality is not what it appears to be.

The mother, with language as her mode of communication, is unable to traverse the distance of a mute world which is one of the crucial factors behind the turn of events.

Sheel’s investigation to find out the truth about her daughter’s death led her to meet businessman Jawahar (Prashant Narayanan), his love interest, and his group of enforcers. Also in the story, is a curious police officer Farooque who has a particular interest in Supriya’s case.

Sheel’s venture into the puzzles behind the incident forces her to uncover some of the mysteries around her daughter, compelling her to re-think and examine her relationship with Yash’s brother.

It also leads her to an intricate scam involving an astonishing amount of cash and a human courier web, with people in the network ready to do what it takes to remove all the obstructions from their path.

At the center of these scamsters is a past sex worker turned Mistress Neelam who is in charge of the entire scam. She too had her own struggles and is not ready to give up on her aspirations. The two women wonderfully play the role of the protagonist and antagonist.

An unintentional act in the web of secrets steers a string of events that results in another death. As the story moves on, the avenging mother has to still solve the puzzle of the first death and hide the situation of the second.

The engaging crime drama has a plot and themes similar to those you can expect from a series of the genre. Mai is primarily a tale of the transformation in the personality and identity of a woman in the face of a tragedy.

The inevitable adaptation into a different avatar as Sheel encounters murder, scams, and gangsters shows the changes in one’s choices when they are forced to be in a particular circumstance.

In a supporting nonetheless important role, Seema Pahwa plays the role of the ambulance driver for the old age home. Her interaction with Sheela brings out her own share of dark memories.

A great feature of the crime drama is its minimal use of violence and masculine elements as you might expect from any other crime drama.

The series remains a slow burn with Sheel fighting with her impulses and trying to make sense of things around her.

With six episodes of approximately fifty minutes each, Mai has the potential to grab your curiosity; however, to keep it affixed is a matter of how memorable the entire web series is.

This is where it falls short, even with remarkable direction and a steady pace. At the heart of the series is Tanwar’s performance which will be one of the few notable aspects.

Single All The Way Review: A Heart-Warming Love Story

9 Films That Deal With Loneliness

9 Films That Deal With Loneliness